The Barron’s 400 Index (B400) started the week with a newly reconstituted roster of constituents following its most recent rebalance, at the close of trading, on Friday September 16th. In its latest reshuffle, B400 replaced 166 of its constituents (three of these replacements occurred because of corporate actions), or 41.5% of its members, slightly below its historical turnover of 169 companies per rebalance.

Consumer Sector are Out, Energy and Industrials Are In

The latest index reconstitution resulted in one of the most meaningful sector rotations we have seen in years. B400 has made some clear sector bets with its most recent selection when compared to its own historical record and relative to the broad market (as measured by the S&P 500 Index). Figure 1 illustrates the sector changes that have occurred between March and September, along with the index’s historical sector allocations.

The first significant change worth highlighting happened in the two consumer sectors, which combined had a net loss of 29 companies (net loss is defined as all additions minus all deletions). Consumer Discretionary lost 23 names and the sector’s allocation is now four percentage points below its historical average of 18%. And while Consumer Staples lost only six names, this represents 40% of its allocation in March. Given its size (in terms of company count), the sector has never had a very large allocation in B400, averaging only 5% of the index’s weight since 2007. Nevertheless, it is notable that the current count of just nine companies is the lowest since the March 2019 rebalance. This could suggest that consumer staples companies are seeing significant margin erosion and decelerating sales growth as some companies seem unable to pass rising costs in input prices to their customers.

The second, and perhaps most significant change in B400, occurred in the Energy sector, which gained 25 names and now has 65 companies representing it in the index. At 16.25% of the index’s weight, this is twice the sector’s historical weight. In fact, this represents the index’s largest allocation to Energy stocks since March 2009, when 72 energy stocks were selected. That period corresponded to the market bottom following the 2007-2009 global financial crisis, a period during which U.S. stocks reached historically low valuations. While we still think valuations in parts of the U.S. market are likely to deflate in coming quarters, it is clear MarketGrader’s methodology is finding plenty of value in the Energy sector. The incoming group of stocks in the sector sport an average trailing P/E of 11.6, and a forward P/E of 6.8. The sector’s medians are even lower, with the group trading at 9.1 and 5.5 times trailing and forward earnings, respectively. By comparison, the new class of upcoming B400 selections trade at an average trailing P/E ratio of 16.1 and an average forward P/E ratio of 13.9.

The next significant change worth highlighting at the sector level following B400’s last reconstitution was the increase in Industrials from 68 to 80 names, reaching the index’s sector cap. In fact, absent the cap, the total number of stocks in the sector would have been closer to 85. The sector’s 20% weight is now three points above its historical average of 17%.

Lastly, it’s worth noting that for the first time in eight and a half years Financials failed to reach the 80-count cap per sector. Although B400 has 75 financial stocks in its new roster, or 18.75% of its weight, this breaks a string of selection periods in which the sector consistently reached the cap. For perspective, however, please note that the historical weight for Financials is 16% dating back to the index’s launch in September 2007.

The changes described above, combined with B400’s marked under allocation to Technology names means that, following the rebalance, the index looks quite different from the benchmark (when using the S&P 500 Index). This is unsurprising, since the S&P 500 reflects the market’s makeup by size, whereas B400 reflects the country’s best companies based on MarketGrader’s GARP lens and an equal weighting methodology regardless of size. As technology companies appreciated in the last market cycle at a much rapid rate than the overall market, the sector itself grew to account for a third of the market. And whereas MarketGrader still selected 52 technology names to B400 at its latest reconstitution, collectively these account for only 13% of the index’s weight. This translates into a difference of 18 percentage points relative to the S&P 500. On the other hand, it’s quite notable that the combined Energy, Industrials, and Materials sectors in B400 account for 44.1% of the index’s weight, almost 27 points higher than the S&P’s 17.5% allocation to these three sectors. These very large discrepancies help explain, in part, the disconnect investors see between ‘the market’ and the U.S. economy. Figure 2 illustrates the sector-by-sector differences between B400 and the S&P 500 Index.

Ninety different industries are represented in B400, with 27 of them having five or more companies in the index. Regional Banks once again topped the list with 39 companies, followed by Oil & Gas Production with 23, and Semiconductors with 20. Figure 3 shows all industries in B400 represented by at least five companies.

Figure 3. Industries Represented by 5 or More Companies in B400 at September 2022 Rebalance

The distribution of the new B400 constituents by size was little changed, as is usually the case at every rebalance. Fifty-nine companies in the incoming class have a market cap greater than $50 billion, while 51 companies have a market cap below $1 billion (but above $200 million, the index’s market cap floor). Figure 4 shows the breakdown by size across arbitrary size segments.

Seventeen companies with a market cap greater than $50 billion were removed from B400 during the latest reconstitution. Since these are all well known, widely held names, we include the list below:

Meanwhile, 20 companies with market caps above $50 billion were added to B400:

Fifty-five companies have been members of B400 for at least two years, including 12 that have been index constituents for at least five consecutive years. They are:

Some of the above are also members of what we informally refer to as the ‘Barron’s 400 Hall of Fame,’ or the 30 companies (among current constituents) that have been selected the most times to the index since its base date in 1997 (50 total semi-annual selections). The list appears in Figure 5.

Figure 5. Thirty Companies with Most Selections to B400 Among September 2022 Constituents

Once investors are ready to jump back into stocks following this year’s painful pullback, the new Barron’s 400 Index offers a clear alternative to other widely held, broad market benchmarks. Particularly if many of the other broad indexes are still vulnerable to additional pain in unprofitable companies or in large cap technology names, where valuations might still look stretched in historical terms. 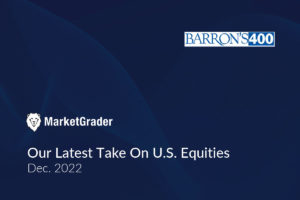 Investors Continue to Underestimate the Impact Higher Interest Rates Are Having Across the Economy. Beware Expensive Large Cap Stocks. 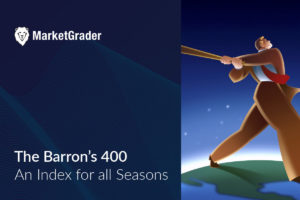 The Barron’s 400, An Index for all Seasons

B400’s approach is focused on consistency rather than market timing. To use a baseball analogy, B400 focuses on consistently hitting singles and doubles to drive in runs, rather than swinging